I put up a post recently about why it’s a waste of time trying to get 12 month tourist visas. That was the second one I’d put up in the last 6 months. The last one went up only two weeks ago.

Yet lately I get a flood of enquiries asking about 12 month tourist visas! I would say almost every day I get someone asking about one, especially those who are in long-term relationships. And we’re fairly sure we know why! 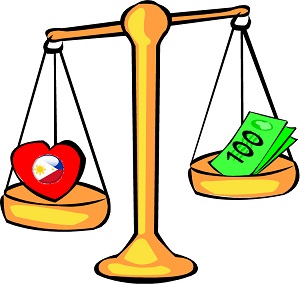 END_OF_DOCUMENT_TOKEN_TO_BE_REPLACED

I’m sure most of our clients know all too well about the revenue-raising increase in the cost of partner visa applications that happened 1 January 2015. Offshore applications, which are 99% of our applications, have gone up from $3,085.00 to $4,630.00, and fees for kids have also risen.

Much as I wish it wasn’t the case, the Government were correct in knowing they had a captive audience. No one is going to give up on their true love. I don’t believe any Filipino/Filipino spouse or fiancee has been dumped because of this. They know that you will find a way, and the Government coffers will increase as a result.

END_OF_DOCUMENT_TOKEN_TO_BE_REPLACED

It seems the Government found themselves a way to make up for budget shortfalls, and decided to milk a captive audience by cranking up the Visa Application Charges – Partner Visas (ie. prospective marriage visas aka fiancée visas, partner visas aka spouse visas) only, both onshore and offshore.

END_OF_DOCUMENT_TOKEN_TO_BE_REPLACED

What it means is this:

Despite how you pay us (Down Under Visa), we pay the Department via credit card. This is how payments are made. They have no bank transfers or EFTPOS systems in place. We pay your Visa Application Charge via credit card, and they will now be imposing a credit card surcharge on those payments.  END_OF_DOCUMENT_TOKEN_TO_BE_REPLACED

We had been told about Australian visa application charges going up on 1 September 2013, and Down Under Visa warned everybody about this as soon as it was announced.

And we had been told that all would be going up EXCEPT tourist visas.

Well, guess what? It seems that tourist visa fees also went up 1 September 2013.

Fortunately they haven’t gone through the ceiling, as they were not among the more costly of visas to start with. However we will have to pass this on. Anybody who has already paid, we will wear the increase as we’ve done so with the last couple of increases. However any new clients from now on it will be a different matter.

Hopefully DIAC will be kind over the next year. Fingers crossed!