The wrong reason for an onshore partner visa application

Down Under Visa do not tolerate bogus documents or false statements. Many of our clients know all too well how we react when such things are suggested. Despite that fact threatens the integrity of the system we work in as well as the integrity of the visa application we would manage and lodge, nothing is worth us risking our registration as Registered Migration Agents with MARA (Migration Agents Registration Authority). False statements and fake documents can also be considered fraud and are open to criminal prosecution. 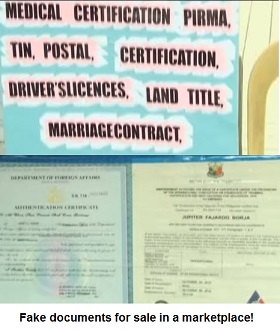 The Philippines is known for a degree of “moral flexibility” when it comes to paperwork and bureaucracy (note the photo above!). People are too often not reluctant to hide a problem with a lie, and there are always plenty of people around (often in Government offices) who are quite willing to help too. And generally low incomes make the temptation to become corrupt just so much sweeter. The Philippines Government is trying their best to stamp out these old-school practices, but they still exist.

I heard today that one of our clients discovered recently (AFTER her late husband had died) that (a) she was never legally married to him, (b) he was apparently married legally to someone else before her, and that (c) she has children with “parents married” on their birth certificates. What may have seemed like simple and harmless choices at the time turned into large problems that will take time to repair.

We insist that our clients fix these matters by going through the proper channels. We will often tell them to see an attorney to fix complex problems. Slow and frustrating, yes. But necessary. Public Interest Criteria (PIC 4020) applies to partner visa applications and to tourist visa applications, and this means fake documents and statements can lead to refusals and bans of 3 years up to 10 years.

We do get applicants who think it would be easier to try to bypass us and to apply within Australia. Back home in their old stamping ground, where they know their way around. And they may even find a Migration Agent who lacks the Philippines “street smarts” that we have, and this agent may not notice the inconsistencies in documents. After all, who in Australia has ever heard of fake birth certificates and fake marriage certificates?

So in goes the application, and they breathe a sigh of relief! The Department have accepted it and they’ve passed the first hurdle.

But what do they think will happen when the Case Officer in Australia looks at two different documents that contradict each other? A CENOMAR (Certificate of No Marriage, stating that the applicant was never married) alongside a child’s birth certificate that says that the parents were married? And do they think they will not notice that a birth was registered when the applicant was 42 years old?

And what do they think will happen when the Case Officer in Australia is not sure about something? Do they think he/she will NOT email scanned copies to their colleagues in Manila for some expert advice? Of course they do. This is standard practice.

We at Down Under Visa don’t make the rules. Some we agree with, and some we don’t. However our opinions don’t count. And our job is to get you across the finish line with a visa grant in your hot little hands. Please don’t try to be clever and to avoid us. We may appear pedantic like boring old school teachers, but we’re actually the best friends you could possibly have. Like real-life best friends we will always tell you what you need to hear, even if you don’t like hearing it.

(Please note we are on holidays from 19th of December 2014 to 5th January 2014. This post was scheduled to send before we closed.)